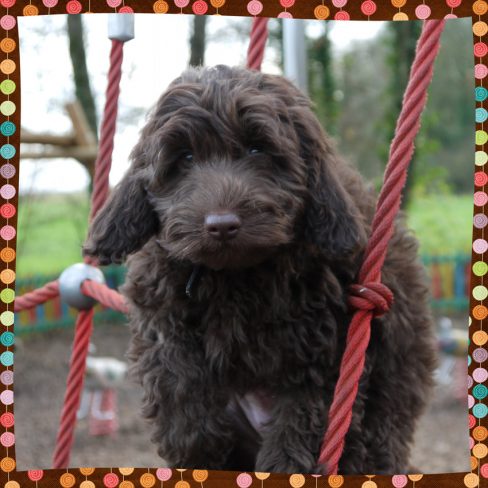 Tabitha is a 100% Australian Cobberdog puppy. Adopted by new family now called " Bear" . Tabitha's fmaily love her sooo much that they returned and adopted another puppy from us, see updates.

2015 Update from adoptive family after adopting new puppy from us

“They had their first play this morning – Bumble chasing Bear around the kitchen ;). Bumble slept ok, only cried for about 1 hr on and off and now right as rain. Here they are, deciding who gets which end of the couch!”

“It goes without saying we ADORE Bear – she is an amazing dog. People stop us all the time to tell us she’s beautiful, but more importantly that she has lovely temperament!”

We absolutely adore Bear. She has quickly become one of the family and is getting up to all sorts of mischief ..She now sleeps very nicely in her crate, and will also stay in it for 3 hours in the morning and 3 hours in the afternoon while we are at work. She has a lovely dog walker called Sander who takes her out at lunchtime and sits with her for an hour as well. She is fully house trained (a few teething issues) and we are doing puppy classes with her and we have been told she is a very smart doggy. She walks off the lead in the woods or in a big park near us and comes when called. We’re working on “stay” but she’s getting there. She has a lot of friends in the park and plays with them every day. She is doing very well with her socialisation. She is hilarious trying to get big, old dogs trying to play with her, and running round them in circles trying to make the chase her. She has a lovely cheeky personality and is incredibly smart – trying to work out what you might want her to do before you’ve even told her. She loves a good tummy rub, in fact as soon as you go near her she’s on her back like a peking duck, waiting for a rub. She’s now got a seat on the front of my bike and will sit in it when we cycle. She’s been for several haircuts and she charms the people in the salon and comes home with a ribbon round her neck. We had our first “fright” as 2 days ago she got lost in the park off lead and 10 people were looking for her all over the place. But clever little Bear found her way home as was at our front door when she was found. She was a bit shaken but fine. It took years off our lives – we could not imagine being without her now. She suffers a bit with car sickness but we’re working on that too. I am attaching some pictures of her. You can see how much she has grown. We are constantly being told how beautiful she is and/or being asked what type of dog she is.”

If you’d like to see more chocolate puppies, check out our gallery! There you can select which size, colour and see our partly-trained pups. If you’d like more information about our health screening or you have allergies, please follow the links.

We’d love to hear from you, so if you have any questions about our pups or the breed, please contact us. If you’d like to book a call with Lisa, please fill in our puppy preferences form.

If you visit our doodle info page, you’ll find everything you need to know about us and Australian Cobberdogs – from the four types of Labradoodles to coats and temperament.